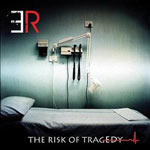 ER
The Risk Of Tragedy

Drawing influence anywhere from pop to classical to techno, the three-man group ER from the state of Oregon plays more of a straight-up rock sound than you may expect. In the fall of 2010, they released their debut full-length independent album called The Risk of Tragedy. Though it's mainly straightforward rock, ER does utilize a couple different subgenres in their brand of rock. At times it's edgy piano pop rock, and other times it's just rock music. The piano does remain a constant throughout the songs, despite which style they're currently going after. To give an overall synopsis of what The Risk of Tragedy sounds like, it's almost like if Ben Folds Five and Three Days Grace met each other in the middle (and one member of Hillsong occasionally passed through). "Feels Like Falling" has a definite rock edge, while "Falling In Like" is much more poppy (with sweet-intentioned but somewhat immaturely-written lyrics). "Ever" slows the album down a few notches with a softer ballad. It's one of the times when it's easy to see that the musicianship is what shines from ER. The piano is really pretty and the acoustic guitar in the bridge is executed rather well. Another good example comes in the rocker "Go." The guitarist, Nathan Henry, displays his talent with the instrument, practically taking center stage. The rest of the song is subpar material borrowed from countless other rock songs. Henry also tears it up in the beginning of the album. The guitar solo section of "Superman For A Day" is impressive (and quite surprising). The only big downside to the album is the lack of production. Sometimes the mixing is off and the music drowns out the vocals (or vice versa). There's also room for improvement with the lyrics and with the songs' structures. With a good deal more focus on those aspects, I could see ER making some pretty decent tunes. The Risk of Tragedy needs some work, but you can surely find potential in it.