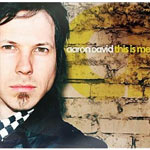 Aaron David
This Is Me

San Antonio, Texas native Aaron David has been involved in church worship teams since the late 90s when he was playing keyboards for the youth worship team (while primarily focusing on another band called Dave Bell and the Lion of Judah). He soon moved up to leader of the youth worship team, then relocated to Houston in 2006 to lead the youth worship team at Lakewood Church, and shortly thereafter became the lead worshiper for the church's main service. While also leading worship at Houston's Woodlands Church, David is taking a shot at the music industry, with his debut worship album, This Is Me. David's music can easily be considered pop rock, with sounds similar to that of Casting Crowns and MercyMe; in fact, much of the time, David's vocals bear a striking resemblance to MercyMe's Bart Millard. An untrained ear may not be able to tell the difference. It can get a little frustrating, given that that automatically makes the album a little bit less of his own (if even to a very small degree). However, you can tell David put his heart and soul into This Is Me; the songs are worshipful, humble and unashamed. He lays himself out there for both the listener and the Lord. David sings of his need for love and redemption, as well as celebrates his victories in Christ. As far as music, the biggest strength is the production, which makes the instrumentation sound clear and full, with not one instrument seeming to overpower any of the others. The arrangement of the songs also works pretty well in conjunction with David's voice and melodies. I'd recommend This Is Me to fans of Christian contemporary music, as well as those who enjoy pop rock in general.