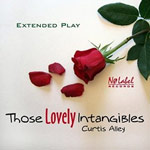 Curtis Alley is a long time singer/songwriter/musician. Alley released his first album in 1978 and has been writing and recording very strong ever since. In fact, his album, 6oh!, commemorating his 60th birthday, was recently featured right here on Jesusfreakhideout. Alley has now penned a first for himself -- a completely instrumental album. Those Lovely Intangibles is an instrumental EP that Alley wrote and recorded over a 4-day period. The album starts with a very sci-fi sounding (Very Star Trek) intro for "Eternal," but the music eventually heads to a more traditional keyboard sound. In fact, much of the EP is pretty standard piano/keyboard music. Alley does, however, add drums and other instruments in for effect as well. There's even a bit of a guitar (keyboard) solo on "Joy." The coolest sounding number present is the 80's vibe of "FaithHopeLove." "Forgiveness" spices things up a little musically with a more upbeat groove. "Longing" feels like another 80's inspired tune and one can't help but notice the similarity of the piano part to the melody of "While My Guitar Gently Weeps," written by The Beatles' George Harrison. It's not exactly the same, but elements of it are eerily similar. Those Lovely Intangibles is an interesting piece of work. All of the instruments seem to be keyboard or computer based, so at times you don't get the full intended effect. Overall, Curtis Alley offers some nice compositions on his latest EP. It won't be for everyone's taste, but if you like piano/keyboard based music, give Curtis Alley's instrumental EP a listen. - Review date: 5/6/16, written by Michael Weaver of Jesusfreakhideout.com