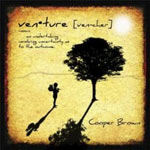 There is definitely not a shortage of artists coming from around the Nashville area. A lot of them remain unknown, but it has also spawned its fair share of popular artists as well. One relatively unknown artist that does deserve some attention is the pop rock/singer-songwriter Cooper Brown. Hailing from the nearby town of Jackson, Tennessee, Brown spent some time at Belmont University learning to be a songwriter. October 2010 was when he released his very first album, Venture. It's a full-length album that shows off Brown's skillful instrumentation. The style is very consistent, with only mild changes in sound present. Some of the songs lean more toward acoustic rock, while other songs are crafted with electric guitars. There's even hints of indie thrown in, too, though not enough to qualify placement in the indie rock section of a music store. Then there are songs like "Atlantic Sun," which sounds like a toned down hybrid of Switchfoot and Death Cab For Cutie, with escalating vocals as the song draws near its end. The last track of Venture is a highlight. It's called "Better Me," and it takes the album out on a great note. It has a solid feel, with a perfectly-placed and played banjo in the chorus. There's no doubt that Cooper Brown could make it in the music industry. Venture is a good album to get his career started. It needs a little more production work, particularly in the vocals, however. He has a good singing voice, but not a great one, and with the mixing not being completely on point the entire time, we easily notice it, as it makes his voice louder than the music. This, and the fact that he is most likely still taking his time to perfect his songwriting techniques, are the only things holding Brown back. Give Venture a chance - Cooper Brown deserves it.