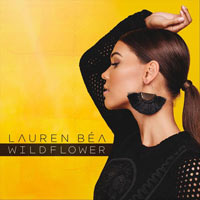 
To say that Austin native Lauren Béa isn't quite a household name just yet would be something of an understatement. Indeed, unless you happened to attend one of the women's conferences for which she provided music, you've probably never heard of her. Luckily for the members of the listening audience, an exhaustive knowledge of her back catalog isn't a requisite for enjoying her debut effort. Purveying a sort of dance/pop/adult contemporary hybrid, Wildflower is aimed at fans - of both genders - who happen to favor those particular musical genres.

Things start off nicely with the toe-tapping dance-pop cut, "Sovereign Still," which transitions seamlessly between its laid-back verses and more bracing chorus. Bookending the proceedings is the closing cover of Hillsong Worship's "What a Beautiful Name," which shows Béa to be equally proficient at slower, worship-based material. In between its beginning and end, though, the record is filled with too many tracks whose rhythms are either awkward ("Everything"), lumbering ("What If We Loved") or simply mismatched to the cadence and pace of their lyrical accompaniment (the title song).

To its credit, the album's themes of positive self-image, aloneness and the loss of an unborn child are bound to resonate with a large portion of her audience. And Béa sings with a strength, clarity and conviction that go a long way toward offsetting her first project's shortcomings. Even with those assets taken into account, though, it's hard not to wish that her freshman outing were graced with tighter beats, a stronger set of melodies and just a little more oomph.

That being said, those who caught her at any of her women's events and liked what they heard will almost certainly find Wildflower to their liking. And its limitations, in the broadest sense, are certainly easy enough to correct. All of which means that, while the majority of dance and pop music purists will want to cherry pick one or two tunes, at most, from her inaugural release, her undeniable talent and admirable conviction bode very well for her sophomore outing and may just well make Béa one of the artists to watch in 2019.