Charity Von is a nineteen-year-old budding new artist on Slanted Records. Her self-titled debut is a soulful blend of pop and rock and has already created a buzz in Christian music since its release this September. Charity recently took some time out of her busy schedule to reflect on the new record, life as a "pastor's kid" and the Christian walk...
This interview took place on: 12/10/2004

Charity Von: I have always wanted to pursue a career in music. From the time I was a young child that was the only thing I ever wanted to do.

Charity: Ive been singing since early childhood in my parents church & everywhere else I had the opportunity. But, I actually got started in the industry through a cousin who was playing drums in a band called Sky Harbor. He told his producer about me and set it up for me to fly to his office in Arizona and sing for him. After hearing me he asked me if Id be interested in signing a production & development contract with him. After much prayer, I said yes and a few short months later I was signed to Slanted Records.

Charity: Ive probably been the most influenced by Janis Joplin and Lauryn Hill. I just love both of their sounds. You can just feel the music when they sing.

Charity: I pull much of my songwriting from situations in my life and the feelings that come from those experiences. I feel as though we all go through things because Gods trying to teach us something, and it would be a shame for me not to share what Gods been teaching me so that someone else might be able to learn something from my experiences as well.

Charity: Being a preachers daughter has definitely strengthened my faith. Even though I think there were situations & obstacles that definitely could have damaged my faith if I would have allowed them to. It all depends on how you allow the negative things to affect you. You can either let them drag you down or you can rise above them and become a better person. My parents always taught my sister and I that. And because of that I think weve come out okay. But, I am 100% thankful that the Lord blessed me with awesome parents that were dedicated to the call. Being raised in that, it really made it clear to me just how important it is to follow the Lord no matter what and it really gave me a sense of the destiny God has for everyones life.

Charity: To those kids that are in very active church families, my advice to them is, never base your faith on what other people are doing. Good or bad. Find the Lord for yourself. Pursue a personal relationship with God. That way, when you see people around you that are supposedly the best Christians fall or make a mistake, you wont be affected by it. Cause youll realize that God is so much bigger than whats going on in church. And God made all people, but that doesnt mean Hes like us. Just because we fail, that doesnt mean He will. In fact, God never fails.

"The Narrow" was inspired by my high school years. During that time I really went through a phase where I was continually jumping back and forth from my way to Gods way. Always walking the line so I could fit in with everyone. Eventually, I reached a point where I realized just how stupid it was to not be standing for anything and I made myself choose, once and for all, which way Id be going. I was either going to follow God whole-heartedly or not at all. And after very little thought, I decided I was going to follow Gods way; the narrow way.

Charity: The Lord has really taught me the drastic measures Hell go through sometimes just to get our attention. Its amazing just how much He wants us around. He was willing to pull all my friends away from me just so He could have me to Himself. I remember after I realized why He had brought me to this place of loneliness, just how bad I felt for not giving Him his due time and place in my life. God has to be #1 in our lives always. Not just when we go through some hard times or when we lose control. If we dont have Him in this place, Hell find a way to make us realize it. So, for those going through a season of this, you better figure out where your priorities have been. Because, honestly, if you think about it, it wouldnt affect us in the slightest if we have God in the #1 spot in our lives when this happens. Because our center would still be there. Thats all that matters. So stay strong. Sometimes the Lord brings us to that dark place just so we can see how empty our lives are without Him. And when its all said and done, and Hes taught you your lesson, make sure you keep Him #1, and the blessings that will flow from that will be unimaginable.

Charity: I think my favorite song on the record is Take Me Through It. I think its because it pretty much sums up the whole record. It basically makes the statement that I cant do it without the Lord. Thankfully, Ive realized this early in my life, because theres so much freedom in knowing that we cant do anything with out His grace. And I think thats a place everyone needs to be in.

Charity: God has been teaching me to really value life and the importance of redeeming our time. One of my close friends just died recently in a car accident. And even though that was a terrible thing to deal with, the Lord really has a way of turning bad situations into good learning experience. And I really believe Hes trying to show me that life is short and we need to take advantage of every moment for an opportunity to bring glory to the Lord.

Charity: I also have two favorite books, Till We Have Faces by C.S. Lewis and This Present Darkness by Frank Peretti.

Charity: I honestly could never, ever choose my favorite movie. I love movies and it would probably be almost just as hard as picking a favorite song. Its that bad.

Charity: My favorite thing to do in my free time is hang out with my family. ( As lame as that may sound.) I love my family and I dont get to see them a whole lot since Ive began my career in music so, when I do its always a blast. I think thats mainly cause, were all so crazy. Especially, my sister and I. The two of us together are definitely a force to be reckoned with.

Charity: Honestly, I dont even want to think about what Id be doing if it wasnt music. I have never, ever wanted to do anything else. If I wasnt an artist, Id be in the music industry & if I wasnt in the industry Id be a professional fan.

Charity: For me the greatest part of Christmas is Christmas Eve. We have a family Christmas Eve tradition that we always uphold every year. First, we go to our church Christmas Eve Candle Light Service which is always beautiful and manages to get you in the Christmas Spirit. Then we come home and eat our traditional Christmas Eve meal of Oyster Stew. After our amazing meal, we sit down as a family and read the real Christmas story as found in Matthew and in Luke. Its always a beautiful evening and my favorite part of the holiday. 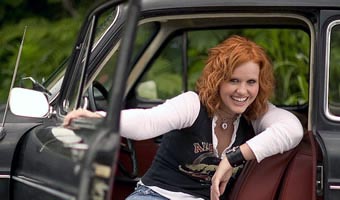