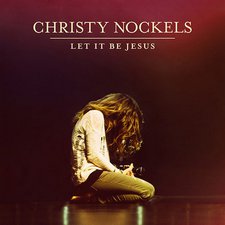 Let It Be Jesus
by Christy Nockels

There is a love so sure / Nothing it cant endure / There is a life it brings / Thats greater than anything / I once was dead within / Hollowed by all my sin / Lost and so led astray / But Your love reached all the way / Your love reached all the way  / Oh, the wondrous Cross / Where the Prince of Glory died / Oh, the glorious Cross / Where Your mercy bled for us / You overcame the grave, waking to a world You saved / Oh, the wondrous Cross / Now Youre my resting place / When trouble I must face / I wont be overwhelmed / Jesus, Your love has won / And my faith looks up to Thee / Sweet Lamb of Calvary / My song will ever rise / To You alone / Hallelujah / Hallelujah / Hallelujah / Worthy is the Lamb

Behind the Song:
Jorge [Mhondera] and I wrote this with Willie Weeks. After we recorded it, I listened back to the demo to figure out song percentages, and it literally sounded like a lullaby. The way [Jorge] first wrote it was very gentle; it just sounded so different [than the final version]. And part of that was Nathans ability to hear an anthem from the lullaby and take that and actually make it happen This is probably the song that people talk about the most from that night. Its very hymn-ish, which is probably why people are drawn to it. It has a poetic thing to it as far as the verses, which I love. The bridge is just, Hallelujah, hallelujah, hallelujah, worthy is the lamb. Im a fan of those moments when you just get to sing one word like hallelujah. Sometimes in that moment, especially when youre talking about the power of the cross, you just want to have a release. I feel like that bridge is something you can get lost in for a little bit and just praise Him for who He is and what Hes done.