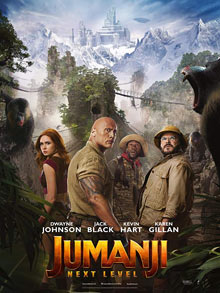 Jumanji: The Next Level

In Jumanji: The Next Level, the gang is back but the game has changed. As they return to rescue one of their own, the players will have to brave parts unknown from arid deserts to snowy mountains, to escape the world's most dangerous game. (from IMDb)

In the golden age of reboots, remakes and sequels, it wasnt really a surprise that the 1995 adventure film Jumanji was given a sequel and soft reboot in 2017 with Welcome to the Jungle. The sequel actually picked up shortly after the end of the original story, morphing the original board game concept into an avatar-driven video game format. Instead of players potentially being sucked into Jumanji to live out their days until someone rolled the dice and freed them, now all players are sucked into the digital world, given the appearance and skills of a programmed digital character (AKA an avatar). The 2017 film leaned heavily on the comedic talents of the team they assembled, coupling it with the adventure aspects of the jungle setting and the inside jokes of life as a gamer. The formula worked wonders, and although I skipped seeing it in the theater, when I finally got around to seeing it last year, I was surprised at just how much fun it turned out to be.

Part of the fun is in seeing actors like Dwayne Johnson and Jack Black playing much different characters from their expected norm. For example, Johnson's usual machismo is used as a joke here as he's inhabited by the likes of a nerdy, insecure teenager named Spencer. Black, on the other hand was inhabited by a self-obsessed, smart phone-dependent teenage girl named Bethany. And, oddly enough, the two play their parts quite believably. Guardians of the Galaxy's Karen Gillan takes on the femme fatale role, while inhabiting the more self-conscious and timid Martha. And while it's still quite funny, it was less of a stretch to have a big, mouthy football player inhabit the more diminutive Kevin Hart. The foursome were a blast together, and I'm not at all surprised that, two years later, we have Jumanji: The Next Level. 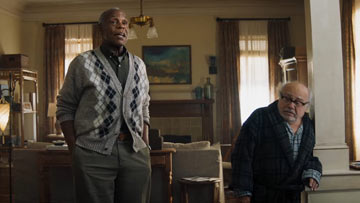 Set a couple years after Welcome to the Jungle, The Next Level follows the four teenagers from the first outing as they're now making their way through life in college. The only one who seems to have trouble moving on is Spencer, and this leads him to pull out the remnants of the broken Jumanji video game and try to fix it. When his friends find that he's gone missing and he must have returned to the game, they decide to go in after him... but almost nothing is the same.

I revisited the first two films right before watching Jumanji: The Next Level, which both helped and hurt my viewing experience. At times, The Next Level just really felt like a retread and not nearly as fresh as its predecessors. However, the film goes to great lengths to try to spice things up, and switching avatars and taking them to new locations is how they try to accomplish this. It does work for the most part, but the uniqueness that Welcome to the Jungle had is definitely missing here. Still, introducing new characters is the key to keeping a franchise fresh and interesting, and bringing in Danny DeVito's Eddie as Spencer's grandfather, and Danny Glover as Eddie's estranged friend, Milo, adds a whole new level of comedic opportunities. Just seeing Johnson act like a grumpy and confused old man alongside the slow-talking and equally aloof Kevin Hart is comedy gold. The movie also knows when the joke has run its course, however, and switching things up again also helps to keep it fresh while bringing back what we liked about the previous entry. 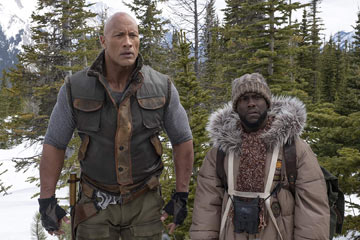 The content is roughly on par with Jumanji: Welcome to the Jungle, but there seemed to be an increase in moderate profanity and blasphemy this time around (with at least 7 uses of "g*dd*mn" and one of "Chr-st," sadly, as well as several uses of "Oh my G-d" and even "Oh L-rd"). The action is frequent but seldom gruesome, with the video game avatar characters often dying in a spray of red liquid before respawning. There are only a few sexual gags, including a bit where Kevin Hart's Mouse avatar must admit he's a eunuch (and therefore, has "no balls"), and Ruby Roundhouse once again is wearing a small and revealing outfit through most of the film -- but there are far less genital jokes this time around than in Welcome to the Jungle.

While The Next Level probably isn't nearly as good, or sharp, as Welcome to the Jungle, and it may feel like a little like it's here just for the box office haul, it's still an enjoyable and funny ride. The acting is solid, as it's great to see the avatar team playing different characters "inside" them throughout the film -- that may be the most fun part about this movie. But if you didn't like what the last Jumanji movie had to offer, there's a good chance you probably won't like The Next Level either.

Sex/Nudity: Grandpa Eddie tries to encourage Spencer that there are other girls out there, and comments that he would marry most any of the women Spencer meets on a daily basis on the subway; While Bethany and Fridge are trying to go undercover inside the game as a pair of brothers (Sheldon and Mouse), one of the villains as if Fridge is a eunuch. He tries to insist he's not, and Bethany encourages Fridge to admit he "has no balls" (so this is said back and forth a couple times, played for laughs). Eventually, Fridge relents and admits "I have no balls."; Ruby Roundhouse is shown in a sexy outfit through much of the film with cleavage, an exposed midriff and short shorts; When Fridge is inside Ruby Roundhouse, he admits the first thing he did was check out her "boobs"; In the game, Eddie as Bravestone is confronted by a beautiful woman who comes on to him and kisses him in a bar. She mentions that if her husband finds out, she'll kill him, and then she tells him to follow her. Eddie is a little aroused by this and wants to follow her in hopes to kiss her again; A joke is made about the large size of a horse's genitals.

Blood/Gore: When the game avatars die, sometimes they disappear in a red, liquidy splatter (almost like a blood splatter); The villain feeds chunks of meat to a man's pet hyenas, and then says that the meat was the man himself, being fed to his own animals;

Violence: Grandpa Eddie is staying with Spencer's family after a hip surgery, and we see him fall a couple times (played for laughs); Lots of action violence, including: We see some characters dissipate and get sucked into the video game console; Characters are forced to jump out of a plane against their will (but they survive); There's an ostrich stampede and an ostrich bites and kills a game avatar; A game avatar falls to its "death;" A character punches another character, causing them to go flying into a rock formation. A boulder then falls on that character, killing the avatar (they soon respawn); We see Eddie as Bravestone punch and kick a lot of guys, sending them flying across the room through and into walls. It's a very violent fight, but played up as lighthearted; A rocket blows up a camp of characters, killing them all (they respawn); A human character talks about being sick and dying; A character, as Ruby, jumps face-first into a large tree; A villain feeds meat of a man to his pet hyenas; The villains threaten to behead a couple characters (but don't); A swarm of angry mandrills (apes) with sharp fangs chase and attack the characters across hanging bridges; A character is stuck in the neck with poison darts a couple times, killing them each time (but they respawn); And other action violence. Disclaimer: All reviews are based solely on the opinions of the reviewer. Most reviews are rated on how the reviewer enjoyed the film overall, not exclusively on content. However, if the content really affects the reviewer's opinion and experience of the film, it will definitely affect the reviewer's overall rating.