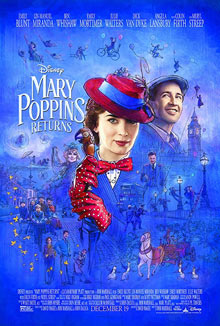 Decades after her original visit, the magical nanny returns to help the Banks siblings and Michael's children through a difficult time in their lives. (from IMDB) 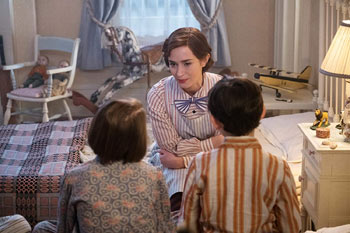 In the age of the sequel and reboot, I suppose it's no real surprise to finally get a sequel to a beloved film from over 50 years ago. In 1964, Walt Disney translated P.L. Travers' book Mary Poppins into a feature film, and it's been a treasured cinematic classic ever since. For 2018, director Rob Marshall suited up actress Emily Blunt in the titular role for the first new Mary Poppins adventure since '64, appropriately titled Mary Poppins Returns. While the original story saw the magical nanny coming to the rescue of the Banks children, Michael and Jane, she is now back to help out the Banks family once again, this time watching over the three children of the now grown-up Michael Banks.

I remember watching the original Mary Poppins a fair amount as a child. It's a good, whimsical family film (actually, it's my wife's favorite movie--next to Jaws, that is). However, as an adult, some of its luster has worn off. A lot of the acting in the original is a bit over the top and goofy--as if watching a play geared towards a young audience that has been caught on film. The real standout aspect of the movie is Julie Andrews' wonderful performance as Mary, and the memorable songs. It's still a fun film, but one thing that irks me watching it as an adult, is it feels like the plot meanders from one nonsensical, whimsical adventure to the next. Mary is a nanny to the children, and serves to help Mr. Banks rediscover the importance of his family and a childlike wonder, but the story seems like it goes all over the place to get to that point.

With Travers having refused to ever watch the film and being resistant to Disney's entire filmmaking process, it's no wonder its taken Mary Poppins Returns so long to become a reality. While few actresses today can come close to someone like Julie Andrews, I thought it seemed inspired from the first casting announcement to put Emily Blunt in her shoes. And while Blunt proves to still be no Andrews, she's no less enchanting in the role. In fact, I found myself just really loving nearly everything Mary Poppins Returns presented us. 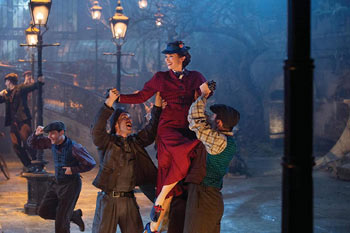 Thematically, Mary Poppins Returns is much heavier film. Adult Michael's wife--and mother to the three Banks children--passed away a year before this story, and Michael is financially in a really bad spot. When we meet the adult Banks siblings, they're learning that the bank their father used to work at is about to take away their home (the very home from the first movie), if they can't pay off their loan in a couple days. So as Michael struggles to deal with the thought of maybe losing his home, and is desperate to find a solution to save it, he and the children are still trying to cope with the loss of the mother. It's a theme that inspires at least two emotional songs, and keeps coming back to the idea that she is not lost, but has gone "to the place where lost things go." It avoids any kind of spiritual aspect, but it seems fitting within this Mary Poppins universe, so to speak.

This time around, street artist and chimney sweep, Burt--played by Dick Van Dyke--is absent (although Van Dyke is not! He does reprise another key role). A quick little throwaway line reveals that he's still alive and well at least, but his character doesn't return in the film. Instead, we have a leery (lamp lighter) named Jack, played by Hamilton's Lin-Manuel Miranda. Miranda is excellent as Jack, filling in almost exactly for Burt's character, but still feeling just different enough to not be a complete rip-off or carbon copy. If anything, it's revealed that he's not only known the Banks children since they were little, but he's kind of got a crush on Jane. He knows of Mary Poppins, though (like Burt did), which makes one wonder how. But Miranda is the first person we see and the last one, as well, and he does a great job threading the film together. The songs and whimsical beats of the story feel very well connected, as Poppins' presence causes the Banks adults to question whether what they experienced in the original film was real, while the kids now experiencing similar adventures have to wonder the same. These fun romps feel well connected to the plot; the first one happens when Mary returns and tries to get the kids ready for a bath. It's everything as fun and crazy as you remember from the original, and today's special effects make the blending of the whimsical with the reality pieces more seamless. There's also a callback hand-drawn animated sequence where the kids accidentally crack an antique bowl that their mother loved, and Mary transports them into the painting on the bowl to try to inspect the damage. It's much like the sidewalk chalk art sequence from the first film, but a fresh new take on it. The way they adhere to the fact the kids are actually on a round bowl is especially creative and fun.

This sequel also surprisingly establishes a villain character this time around -- which is something I don't recall the original having. It's somewhat surprising, and maybe a teensy bit corny, but it works to deepen the story further, adding to the drama the Banks family is experiencing. There's one scene where villainous characters curiously appear in the animated sequence that turn out to parallel the human ones in the real world. It's a bit ominous and potentially scary to some younger viewers, but my sensitive 8-year-old seemed to do okay with it (in fact, he told us once the credits rolled that it was the best movie he'd seen this year).

Aside from the ominous villainy in a moment or two in the movie, the only real content to consider is the emotional weight of the fact that the Banks family are still dealing with the loss of Michael's wife. It adds a lot of emotional weight to everything they go through--especially the threat of them losing their home--and it may be a lot for some viewers to process. Anyone who loved the original may feel like there's already an emotional element just seeing Mary on screen again, so adding the sad elements to the mix may prove to be a bit much. (If you loved the original, defintiely bring tissues.) If you're worried about the magical or whimsical content from a spiritual aspect, it never explains Mary's origin or how she's able to do what she does. There are no spells cast, no incantations--nothing sinister. If anything, she seems like a mysterious angel of sorts who shows up when needed to help people remember the important things in life.

Mary Poppins Returns is not only one of the best sequels I've seen in a while, but it's wonderfully faithful to the spirit of the original. I felt the story is stronger and better constructed, although the film may only be as good as it is because of the history it's building off of. The songs are fun, the acting is solid, the story is impactful and the film is memorable. If you like musicals, Disney films, and/or Mary Poppins, don't miss Mary Poppins Returns!

Sex/Nudity: In a song about books, one story mentions a woman who "barely wore a stitch" and being in her "birthday suit," while another song talks about people metaphorically as trees and how one "takes root" and now they have a bunch of "seedlings."

Vulgarity/Language: 1 use of the British profanity "bloody"

Alcohol/Drugs: A line from a song talks about a man being always "on the sauce"

Violence: A wolf and his minions in the animated sequence grab Georgie and ride off on a carriage with him. The other Banks children go after them and hop the carriage to rescue him. At one point, they dangle dangerously, but they end up okay. The whole encounter is upsetting to them and they wake up in bed all feeling like they'd had the same nightmare. Disclaimer: All reviews are based solely on the opinions of the reviewer. Most reviews are rated on how the reviewer enjoyed the film overall, not exclusively on content. However, if the content really affects the reviewer's opinion and experience of the film, it will definitely affect the reviewer's overall rating.