This Award-Winning Quartet Is Reborn With
A New Project, Releasing For Sept. 15th


Nashville, TN - July 29, 2009 - While Avalon is certainly proud of their past (21 chart-topping singles, 6 Dove Awards, 3 Grammy nominations and an American Music Award), it sure would be easy for the quartet to rest on their laurels and continue to offer their known slick brand of vocal pop. But they are now Reborn, their aptly titled brand new project, slated for release on September 15th (E1 Music).

It is important to note that the similarity between any previous Avalon albums and Reborn ends now, thanks to this cutting edge and unequivocally original record. "Reborn is a fitting title because it signifies the birth of something new and exciting, which is certainly true of the current season of Avalon," explains Janna Long, the group's founding member. Comprising the rest of the quartet is Greg Long (Janna's husband and group member since '03), Jeremi Richardson, as well as its newest member, Amy Richardson, making her Avalon debut on Reborn, and who also happens to be Jeremi's wife.

"I've literally listened to Avalon for as long as I can remember, so I can tell you both as a member and a fan that people's jaws are going to hit the ground when they hear Reborn," asserts Jeremi, who joined the group in 2007. "Everyone I've played it for so far says they'd never expect it, but at the same time, they can totally tell it's Avalon, which to us is the ultimate compliment."

One of the most instantly apparent changes comes in the credits, which for the very first time in the group's illustrious history unites the group with producer Ian Eskelin (All Star United, Krystal Meyers, Stellar Kart, Francesca Battistelli). It's a curious choice indeed considering his respected rankings in the modern rock spectrum, but one that helps cement Avalon's latest endeavor as arguably their most ambitious to date.

"This has been one of the most unique and fun recording projects I have ever been involved in," Ian Eskelin exclaims. "These guys are fearless and their vocals are killer. They are some of the hardest working, ready for anything, talented musicians I have worked with."

A tour is slated for the Fall to promote the new project. This is sure to be an exciting time on the road for Avalon as the group is more than ready to share their new songs with fans across the country.

For the creation of Reborn, Avalon partnered with the label E1 Music. Along with the new venture came a completely open creative canvas where the group was encouraged to stretch itself further than ever before. Previously known as Koch Records, E1 Music has hosted the diverse likes of The Beatles' Ringo Starr, Ashley Cleveland, Twila Paris, and Bishop E. Long.

"They took all the reigns off and basically said, 'you've been doing this for awhile, so just do what you do,'" recalls Greg of the E1 experience. "No one was ever looking over our shoulders talking to us about core demographics, which gave us the chance to just focus on the artistic side. We love our history and are grateful for everything God's given us, but that type of freedom also allowed us the opportunity to experiment and have a lot of fun in the process."

Reborn offers aggressive melodies tied with atypical harmonies and guitar-driven moments. The new sound is sure to give dedicated Avalon fans a new twist on the group's well-known formula, while expanding its appeal to a wider audience than ever before.

"Over the last three years, we released a hymns record, a covers record and a retrospective record, plus had some members change," Janna reflects. "Between that and the fact that life was just happening right alongside it all, there's a pivotal change and evolution. Sure, the vocal standpoint is consistent with the Avalon sound, but the rest is much more varied. This is definitely not your Mom's Avalon record!" 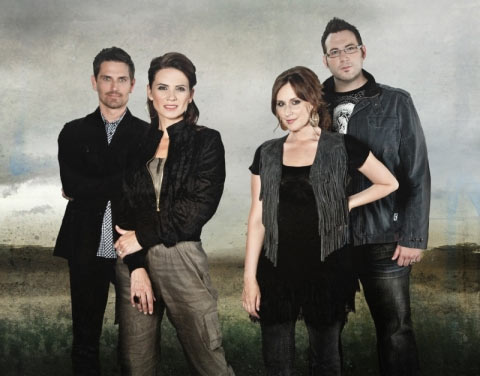 For more info on Avalon, visit the JFH Artists Database.