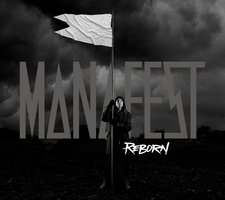 
Chris Greenwood, AKA Manafest, has been in the music scene for quite a while now and he has always seemingly been an artist that is kind of hit or miss. I really dug Epiphany and The Chase, but when you factor in the misses, his albums didn't seem to have real lasting appeal. So, I kind of had this "What will I get this time?" feeling when pressing play on Reborn.

The title track is first up and I am immediately thinking that I accidentally put in the wrong album. The track carries a heavy country vibe. Yes, Mana is rapping over something generally heard in a wild west movie, while featuring the band "The Drawing Room" (Joel from TFK's side project). While I give Mana props for creativity, it's not exactly what fans are probably looking or hoping for. The next track, "Let You Drive," showcases Manafest's rapping which is solid and on-point, but it also features his singing on the hook. Unfortunately, the singing is not nearly as good as his rapping, resulting in a chorus that doesn't do the song justice. Things get a little better in "Fearless," featuring the stunning vocals of Alicia Simila blending perfectly with Mana's rapping, and "Shine," featuring Trevor from TFK, another solid collaboration track. The song "Army" gives listeners a nice God-centered anthem to pump their fist to with chants of "We coming with an army. I'll stand, I'll march, I won't back down." "Pray" and "Stay Close" are decent filler tracks, showcasing slower vibes in the middle of the rap album, while "Last Train" carries some good beats and "Jack And Jill" represents a nice personal theme.

One of the tracks I most looked forward to was "Stick To Your Gunz," featuring Family Force 5's ex-lead vocalist Soul Glow Activatur, and I was expecting some seriously good crunk rapping fun. Unfortunately, neither artist in this track brings it lyrically and the track is a big letdown. Instead, the best track on Reborn has to be "I Have A Dream," featuring Shonlock and Tedashii. This unique combination of rappers piggyback Dr. King's famous speech and make something simply awesome. The scene is set with the dreams that we all wish for and the hope of a better world.

All in all, Reborn is positively focused in its message and most of the beats are decent. However, aside from a few tracks, there is nothing exceptional here. Fans of Manafest's previous album will probably dig this, but not too many new fans are going to hop on board with this album.