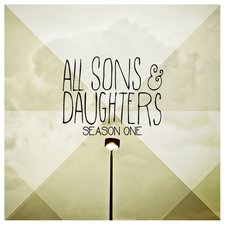 All Sons & Daughters
Season One

Longtime worship leader Leslie Jordan and former Jackson Waters frontman David Leonard started writing songs together in 2009 under the name Sons & Daughters. Last year, the duo signed with Integrity Music and changed the name to All Sons & Daughters (most likely due to the existence of a Scottish band of the same name). Instead of releasing a full-length up front, the artists released two separate EPs within six months of each other. The two EPs, with the inclusion of two additional songs, then came together to form their first official full-length record with Integrity, called Season One.

This review will mainly be focusing on the two new songs included. The first six songs of Season One are from their first EP, Brokenness Aside (a review of which can be found here). "Reason To Sing" through "Reason To Sing Reprise" are from the second EP, Reason To Sing (which you can find right here).

Sometimes when this method is taken (that is, combining EPs into a full-length), the artist or label switches around the order of the tracklist, putting earlier songs later on the tracklist and vice versa. For the fan who had already heard the EPs, it can oftentimes come across as just random song placement. However, All Sons & Daughters did not go about things like this. They took Brokenness Aside in its entirety and in the same track order and made that the first part of the EP. Then they added the first of two new songs right after it: "Dawn To Dusk." It's a terrific addition to the album. It's rather mild and has a folky sound, a la The Civil Wars, that matches the vocals impressively well. The song talks about giving God more and more every day of our lives, while recognizing that He is our one and only God. After going through the beautiful tracklist of Reason To Sing, you get the second new song, "Your Love Is All Around," which also serves as the album's finale. It's the perfect song to end this album, with its quiet and intimate setting as Jordan and Leonard sing sweetly in humble thanksgiving to Jesus as He continues to love and restore His broken people. A few minutes in, they break into the song "Nothing But The Blood," then take it back into their song. It's a simple song, musically, and that's all that's really necessary to close the album.

All Sons & Daughters is one of my favorite newer artists, and I hope there is more to come from these two. Season One is a beautiful worship album with lush instrumentation and passionately-sung lyrics. The only complaint I have is that, having listened to both EPs prior to Season One, it becomes hard not to listen to the full album as two EPs back to back. "Your Glory" has a pretty clear end-of-album feel, which leaves "Dawn To Dusk" and "Reason To Sing" as consecutive songs with beginning-of-album openings. If you've not yet listened to either EP, you may have an easier time with Season One, but those who have may or may not have the same experience as myself. Either way, these songs are diamonds in the rough, and I highly recommend picking this up.