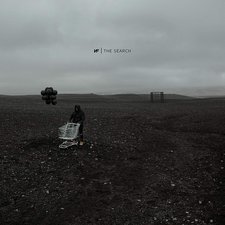 
Over the past few years, Michigan rapper NF has achieved an unprecedented degree of success in both the Christian and mainstream markets. His third (record label) LP, Perception, ended up charting at #1, going on to receive RIAA Platinum certification. Despite the album’s financial success, it was difficult to argue that most of its material was little more than a rehashing of prior albums. One of the underlying issues has been the fact that NF has released his albums in a rapid, yearly succession, offering less time for developing new content, personal growth, and fresh topics. This time around, thankfully, NF has chosen to wait nearly two years before releasing his newest album, The Search.

This has indeed given the rapper some breathing room, but this improvement is partially undermined by the sheer amount of content. Coming in at a bulging 76 minutes, the 20-track album is a gargantuan beast. The fact that The Search doesn’t open with “Intro IV” signals that NF is preparing to head in a slightly different direction. Rather, he opens with the exceedingly reflective title track (and first single), “The Search.” This piece, along with the lion’s share of the album, brings a stripped-down atmosphere, à la Dr. Dre, with lyrics offering an inner-monologue regarding NF’s recent successes and struggles: “The sales can rise / doesn't mean much though when your health declines / see, we've all got somethin' that we've trapped inside / that we try to suffocate, you know, hoping it dies.”

Gone is much (though certainly not all) of the braggadocious lyricism and anger which once permeated nearly every single NF track. In their place is a slower, more thoughtful pacing, with a healthy addition of reflection and humility. This helps smooth out the album, preventing The Search from acting as a codename for “Mansion 4.” This also represents a lot of growth for the rapper, seeing him move past his imitation of KJ-52 and other similar artists. “Leave Me Alone” contains some smart pop-culture references (see: IT), and the par-for-the-course push against the critics and marketers (“I hate when they debate if we're underrated / we're so overlooked that they're lookin' over our numbers, Nathan”).

“Change” is one of the best tracks NF has recorded, with a creative melody and backing track, as well as brutally honest lyrics: “I need a moment of silence / I don't like change, but I'll try it … see, all my emotions are liars / all my emotions are violent / they don't want freedom to find me / should I feel comfortable? I don't / last year, I felt suicidal / this year, I might do somethin' different like talkin' to God more.” “My Stress,” reminiscent of Twenty One Pilots’ work, (positively) reverberates throughout the next portion of the album (especially on the exceptional “Time (Extended)”).

“I Miss the Days” is effectively endowed with the addition of a gospel choir, and while it’s one of the best tracks on the album, its refreshing nature does highlight the unfortunate lack of guest appearances on The Search. Some of NF’s best songs have been those featuring other artists, such as Fleurie, Jonathan Thulin, and Jeremiah Carlson. The album’s length also brings on a certain degree of monotony which could have been broken up with a little more artistic diversity. “No Excuses” has a few quality lines (“I just did a interview, the guy was pretty clueless / you don't have to know the album names or all my music / but at least try to find out who you in the room with”), but otherwise falls back into the mix.

“WHY” possesses a familiar vibe to some of NF’s older songs, but with lyrics portraying an added degree of humility: “Me and pride had made a pact that we don't need no help / which feels like I'm at war inside myself but I forgot the shells / hold my issues up for all to see, like show and tell / a lot of people know me, but they don't know me well.”

The regular closing track, “Trauma” is a wonderful piece, demonstrating a vastly different side of NF. The piano-driven track marks NF’s vocal ability, which is one of his greatest strengths when it comes to setting him apart from the plethora of rap artists. Its lyrics pair effectively with some light strings, and meet the listener on an emotional plain, as he sings out, “Say you're there when I feel helpless / if that's true, why don't you help me? it's my fault, I know I'm selfish / stand alone, my soul is jealous / it wants love, but I reject it / trade my joy for my protection.” This different tone addressing the same concept explored on “Mansion” four years ago helps bring much of the conversation full circle. The digital deluxe closing track, “Time,” (yes, this is the same as this album’s sixth track, save for a few missing seconds of strings) also hammers this point home, and is another album highlight.

Ultimately, the album finishes its (lengthy) run with several standout tracks, including “The Search,” “Change,” “Time,” “I Miss the Days,” and “Trauma.” Most of the other offerings are decent, but they generally fail to set themselves apart from this latest batch.

While the release of super-sized albums, especially within the hip-hop community, is becoming more commonplace, it rarely serves the artist well (aside from bolstering digital streams). When it reaches the point where even fans feel that it’s a chore to listen to an album in its entirety, something has gone awry. Thankfully, this misstep doesn’t wholly sabotage The Search. At the end of the day, fans are left with a quality sampling of songs, many of which represent a few strides forward for NF, both in maturity and in originality.

Being a fan of NFs album, Mansion, and then several select songs from Therapy Sessions, and Perceptions, I had high hopes for his fourth album, The Search. Many of the biggest criticisms levied his way by myself and others, was the lack of growth from one album to the next. He had clearly struck a chord that continues to resonate with listeners, but where was the hope? The Search continues the journey, and with it comes tremendous growth. Less angry, and more sadly reflective, he continues to connect with a generation struggling with aloneness, depression, anxiety, and suicide. This time around, his trademark authentic lyrics have a deeper vulnerability (Leave Me Alone, Change, I Hate Myself, Only), the beats are still banging (The Search, When I Grow Up, No Excuses, Why), and he even throws in a sung piano ballad (Trauma). The Search is gut-wrenching, tightly produced, cohesive, and deeply relatable; brimming with a strong flow and undeniable talent. It's sure to be a smash hit with current fans, and attract some new ones in the process. Overall, it pulls together everything he tried on his previous three albums, and it is his best album yet. - Review date: 7/29/19, Josh Balogh of Jesusfreakhideout.com

Nearly gone is the braggadocious hype talk of NF's past catalog, and reduced is NF's tendency to generate pity from his listeners. Instead, The Search presents an NF more comfortable with his past, his emotions, and even his success. He spends much of the album talking about his struggles in the past tense and examining how he was able to move on (strongly indicating that his faith was a key component). His musical style still doesn't stray far from what he established on previous albums (brooding trap beats, orchestral strings, piano melodies), and it's almost certainly a few songs too long. But as far as lyrically dense, personal hip hop, The Search is about as good as you're gonna get. - 7/31/19 Mark Rice

Not many artists release music with as much passion and vulnerability as NF, and even fewer can package it into something accessible for the masses. With The Search, NF has improved his game since his breakout album, Perception (stronger delivery, more creative rhyming structures, better production), and proves to be an intense and captivating journey through the rapper's mind. - 8/16/19 Christopher Smith