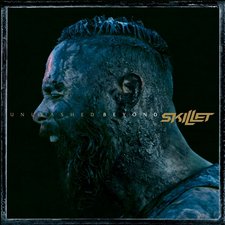 
At this point, Skillet hardly needs an introduction. With two platinum-certified albums, over two billion streams on Pandora, and over twenty number-one singles, they've long been a household name in Christian rock, with several albums and songs crossing over into the mainstream market in recent years as well. In 2009, their polarizing (and first with current drummer Jen Ledger) record, Awake, was the second-best selling album in the U.S. on its opening week, spawned a few multi-platinum hits, and went double platinum itself. In 2013, their concept album, Rise, was also a top-five hit on multiple charts. Again, in 2016, Unleashed hit No. 3 in the U.S. and gave them another smash hit. In 2017, they announced the deluxe edition of that album, titled Unleashed Beyond. So, how do the added songs hold up to the rest of the album? Very well, in fact.

Since the main album has already been reviewed, I'll try to focus mainly on the last eight tracks. The first deluxe track, "Breaking Free," is a hard-rocking song that features Lacey Sturm (formerly of Flyleaf), and is my personal favorite on the album. It's nice to hear some actual screams from John Cooper for the first time since Collide, too. The next two tracks, "Stay 'Til the Daylight" and "Brave," are both great songs, but, in this reviewer's opinion, could have been done better. "You Get Me High," pretty much a 2017 sequel to "Better Than Drugs," features crunchy guitars, an anthemic chorus, and a great solo from Seth Morrison. In short, it's everything you could want from a Skillet song. Unfortunately, the album goes mostly downhill from here. "Set It Off" settles for generic and often questionable lyrics, suffering from many of the same issues as "Saviors of the World." This is really a shame, as the track soars musically. The last three tracks are remixes, and, though well done, none are as good as the originals.

While it may not hold up to Skillet's earlier efforts, Unleashed Beyond is still a great rock album. If you've never listened to Skillet, a great place to start is right here.