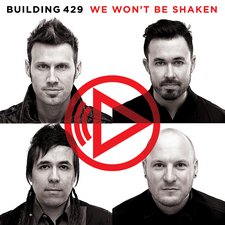 Building 429
We Won't Be Shaken

"All I know is I'm not home yet/this is not where I belong/Take this world and give me Jesus/This is not where I belong." Little did Building 429 know that the chorus of their hit single, "Where I Belong," would propel the band back into the CCM spotlight; sure enough, though, one hit can make all the difference. Winning the 2013 Billboard Music Award for Top Christian Song and being one of the most-played songs on the radio nationwide, "Where I Belong" restored Building 429's name to the forefront, and with one success bred the need to release another album, resulting in We Won't Be Shaken.

The universally appreciated "Where I Belong" laid down a curious archetype that We Won't Be Shaken follows to a tee. It should come as no surprise that the lead single of We Won't Be Shaken, the title track, follows the same pattern of "Where I Belong" with mellow, unassuming verses that lead into a massive, straightforward chorus with crowd vocals to match ("Whatever will come our way/through fire or pouring rain/oh we won't be shaken, no we won't be shaken/whatever tomorrow brings/together we'll rise and sing/that we won't be shaken"). This generic songwriting style permeates the entirety of the record, giving the album a slightly stale flavor that's easy to forget. These simple truths don't feel very cohesive, either, throwing lyrical fluff into the mix for truthful, but unabsorbing product for the album's whole.

It's not that there aren't some moments of interest (such as "Wrecking Ball (Press On)," which finds Group 1 Crew's Blanca Callahan collaborating well with Roy as a compelling duo), but the prolonging issues that pervade We Won't Be Shaken, expected or not, reveal that the band's style hasn't developed much at all since Listen to the Sound. For one, Building 429 still hasn't settled on a specific range on the broad pop/rock spectrum; with Jason Roy's croaky vocal style and the occasional crunchy guitar part out in the open, it leaves room for edgy rock tracks like "Get Up," "Bonfire," and "Revolution," but they only make the ballad-heavy nature of the rest of the record feel forced (or potentially the other way around with the harder tracks being out of place). While variety is never something to be ignored, the large scale of "Bonfire" is oddly followed by the comparably minimalistic "Press On" just reveals a less focused approach that the band would do well to refine.

After Listen to the Sound became a runaway industry hit, Building 429 grabbed a stable, attentive audience that hasn't been present in years. Unfortunately, this also results in relying on their "same old" for We Won't be Shaken, even closing out the set with a live recording of "Where I Belong" to drill in that message even more. Save for exceptional moments, We Won't Be Shaken doesn't pull any punches, but it capitalizes on Building 429's reputation as a crowd-pleasing pop/rock quartet even if they could afford to shake things up a bit more.

We Won't Be Shaken, perhaps more than anything else, is an album of halves. The first portion finds the Building 429 cooperative skillfully darting between shimmering straight-ahead pop ("Wrecking Ball"), infectious, dance-friendly, Maroon 5-inspired grooves ("Get Up"), and even the occasional out and out rock number ("Revolution"). Then, as if catching themselves, the group quickly rattles off a steady stream of faceless, enervated fare that sounds like virtually every other song currently populating the Inspirational Pop chart.

Just as all seems lost, though, the band pulls the proverbial rabbit out of the hat with "All the Glory," a sparkling acoustic-driven piece that proves that all things pop need not be fashioned from that same lump of radio-ready clay. The tacked-on live version of "Where I Belong" does little to add to the intrinsic value of the new record, which, although certainly not a landmark, is, at the very least, one of the band's most varied and adventurous outings to date. - Bert Gangl, 4/10/13