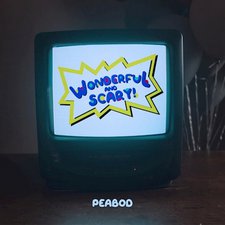 
With "Wonderful and Scary," Centricity Music's PEABOD continues to build onto the story that started with the release of "Big Feelings" in July. The third installment in his 5-track Growing Up: Part One EP is now here, and it's a loving nod to those who've been closely following the Washington State rapper for the past three years.

For my full thoughts on first single, "Big Feelings," click here, and for his previous single, "Heavenly Father," click here. "Big Feelings" was a darker tone than most fans are used to from the self-proclaimed "happy hip-hop" artist, but it helped paint a very honest, very relatable picture of Isaac Peabody's personal struggle with bitterness. He has since revealed that God has brought him out of this inner turmoil, but he isn't about to let the lesson pass him by without sharing it with his listeners. "Heavenly Father" appeared to be an outright prayer for surrender and healing (Heavenly Father, won't You show me where you are, cuz I feel too close to this / Heavenly Father, won't you hold me in Your arms, cuz I'm in the thick of it.), which was the perfect response to "Big Feelings." "Wonderful and Scary" is slightly removed from that one-two-punch thematic journey, but it serves as kind of a self-recalibration, so to speak. From its opening soundbytes taken straight from cuts on his label debut, Healthy Snacks (which actually spent some time in the indie world before getting a 2018 label release), "Wonderful and Scary" is shaped from a heart of pure gratitude, as he acknowledges his humble beginnings and those who've supported him from the start. The song also reflects on the overall pitfalls and blessings of growing up. In the chorus, Isaac gets the point across clearly, singing, "We grow up, we fall down / It's wonderful and scary / Stepping out of our town, both terrified and daring / Seems live everyday I'm growing up another way / We grow up, we fall down, it's wonderful and scary."

The release of "Wonderful and Scary" gives us a glorified mini-EP now offering three-fifths of PEABOD's next official EP release. And, with each new song, PEABOD is telling a personal journey that is as relatable as it is catchy and enjoyable to listen to. He's a consistent talent that continues to churn out delightful tunes with some real thematic meat to chew on. If you haven't gotten any of his new tracks yet, this 3-track sampler is a really great place to start.