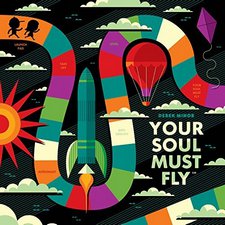 
Whether you remember his days as Pro or you only know him as Derek Minor, the RMG founder is definitely among the top rankings when it comes to CHH rappers these days. Minor has the ability to be gritty, serious, and have fun at the same time all while producing a most excellent sound. According to sources, he is releasing a four-part project over the next four months and Your Soul Must Fly is the opening act. The idea behind this short set is to get fans stoked about some new tracks while cranking party tunes that are worthy to be played at your next event. So let's see how these seven tracks do in that respect.

"Launch Pad" is a hard-spitting intro track and serves the intro purpose nicely, while "Take Off" is straight-up fire, featuring heavy hitters like Ty Brasel, Canon, and KB. If you haven't heard of Ty yet, you are missing out and the four combine here for a superior rap tune laid down with some seriously good industrial beats, making one of the best rap songs of the year so far. "Astronaut" and "Anti-Gravity" come along next and offer some light fun and encouraging tunes while carrying some outer space vibes nicely intertwined in the beats. Each track is simple in its positive message yet offers head-nodding at its finest. "Jumpin" would be the only average track present, as the hook gets a little mumbly at times, but that would be the only real misstep on this small sampling of Minor tunes. "Level" features those staple gritty raps the rapper is known for, while the title track delivers a soft chill vibe to conclude this release and reminds listeners to focus on God instead of material things that can bring us down.

In the end, this is a good release. There's nothing really mind-blowing here and some of the hooks may come off as simplistic, but for the most part, the tunes are still thunderous and worthy to be played at house parties everywhere. With only seven tracks, listeners are going to be wanting more, but if Minor follows through on his plan to release a new project every month for a while, this is a great start to what could become the best hip hop we've heard all year.

Conceptually, Your Soul Must Fly is as cohesive as they come. From the first line on "Launch Pad" ("Darkness all around me/I've gotta rise"), both the musical and lyrical themes of the EP are made known. The sonic palette of dark electronic percussion, looped keys parts and heavy sustained bass complements the uplifting narrative of perseverance that is apparent on essentially every song here. Unfortunately, these positive ideas get bogged down by their "party music" dressing, lessening their impact a bit. Only the title track feels truly inspiriting and story-like.

Each song has cool moments (with the breakdown on "Take Off" being the cream of the crop), but most of the grooves themselves are pretty generic. This feeling of sameness is only accentuated by Minor's engagement with some of the genre's more irritating clichés, particularly the tendency for repetition of the song's title.

Still, the consistency of stylistic integrity on this release is impressive and makes it an enjoyable listen overall. If this is an indication of what Minor's forthcoming EP series is going to be like, he'll need to do a little more to make each one feel unique, but the potential is definitely there. - Review date: 8/28/17, written by Mason Haynie