Producer, missionary, photographer, wedding DJ - these are a few of the items you'll find on the resume of Chase Caffey. You'll also find that he's been releasing hip hop music under the name dawnpatrol. Last month, he released his debut album, Testimony of Chase Caffey, a musical story of his life from getting saved to finding love to beginning his work as a missionary all over the world. Caffey shares a bit about his old life before Christ in "Lights Fashion Cars Money," where he describes living for fame and worldly pleasures and how empty that life is. The song ends with with him recounting being invited to a Youth With A Mission event, where he reluctantly showed up and ended up giving his life to Jesus. It jumps straight into "Faith Journey," which describes an adventure he and a friend go on, which was designed to build their trust in God's provision. Caffey goes into detail about the trip, the places they visited, the people they prayed for, and the miraculous ways God got them where they needed to go. This sort of provision, as well as the depth of God's love and the importance of being faithful to him in all aspects of life, is a continuous thread throughout these songs.

While the album would be most appropriately filed under hip hop, Caffey does weave various other styles throughout the beats, as well. Songs like "Lights Fashion Cars Money" and "Burgundy Sweater" have hints of EDM, while "Prodigal" is a full-on trap song, and "Faith Journey" contains more than 8 minutes of old school-style beats. It's no small feat to incorporate so many different subgenres into an album and keep the cohesiveness, but dawnpatrol has done exactly that. The one thing that really sticks out as an area of improvement is Caffey's flow. Some songs on this album indicate that he's had some amount of success as a rapper in the past (for instance, sharing the stage with Chamillionaire), but there are a lot of times where the flow is a little awkward or even sounds forced. He has a good sense of rhythm, but at times, it sounds like his goal is to write a pop song and work it into hip hop (I have no confirmation of this, of course, it just sounds like it). Pop and hip hop can definitely work well together (ask Peabod), but I think dawnpatrol could work a lot better as more of a pop project than a hip hop one. That being said, Testimony of Chase Caffey has a lot going for it, and I enjoyed most of my time spent listening to it. Fans of Peabod and B. Reith may enjoy it as well.

Testimony is one of the most powerful tools of evangelism that a Christian can use. In his latest release, DJ and songwriter Chase Caffey, a.k.a. dawnpatrol, is giving the world his version with Testimony of Chase Caffey. This sprawling album puts testimony in its proper place among a nearly hour-long gospel presentation. We get plenty of Caffey's story, but we also hear plenty of tracks inviting the unbelieving listener into a relationship with Jesus. While hip-hop/EDM is the main fare here, Caffey does incorporate other elements like Southern gospel piano in "Testimony," searing electric guitars in "Faith Journey," or soft acoustic guitars in "The End." That's just a sampling of the other surprises found during this record's run time.

Caffey's heart for evangelism is on intense display, whether it's in telling his own story or reaching out to the listener. He even ends with a track titled "Altar Call" where he gives a straight-up invitation and "sinner's prayer." While there's more than enough here for non-believers to chew on, believers can also enjoy Caffey's Testimony and even be challenged by it. This DJ has had some wild experiences and lived out his faith to a point that would make most uncomfortable. But life in Christ was never guaranteed to be easy, though that certainly doesn't mean it's impossible. As dawnpatrol, Caffey shows his audience what a life devoted to Christ can look like. Most people may never wind up laying down sick beats at a party, but the adventures brought on by a life of faith can mirror Caffey's in more than one way. That component in the message, mixed with the wide variety of the music and sounds, makes Testimony of Chase Caffey a competent record and engaging listen. - Review date: 11/22/22, written by John Underdown of Jesusfreakhideout.com 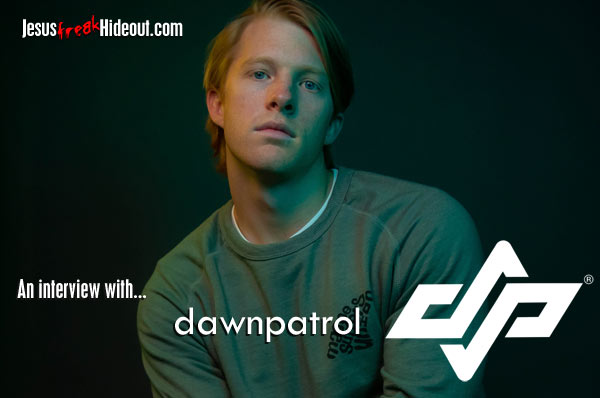 Chase Caffey: I lived in Hawaii for about 7 years and "dawnpatrol" is when you wake up and go surfing as the sun is coming up.

Chase: That's a great question - I started with one song (quiet time) and realized after I listened to the finished mix that it was indeed an introduction of my testimony. It felt more like a story than a song.

Chase: DJ'ing weddings pay the bills! I used to rap when I was about 16 - 17 all through high school. Yet - it was pretty dark stuff. After I encountered God again while in Fiji my heart changed and he revamped the love for hip hop and rap inside of me.

Chase: I love to collaborate - I (chase caffey), dawnpatrol am the sole producer / mixer / mastering engineer - but I do work with other artist to make a song that provides different flavors.

Chase: Really good - in the Kingdom way especially. It is almost like an Ice Breaker for meeting strangers. For instance - I'll talk with new people at the gym or store and ask them if they would be interested in hearing my testimony. When they say yes - I airdrop them the Album! (Haha! I never thought sharing my testimony would be so easy now a days.)

Chase: That God found me when I was in a dark place - and he wants to do the same for you! There is a God and he does love you. Open your heart and give it time - taste and see the difference!

Chase: I have an Acoustic Album in the works (10 songs) and a small Youth Group Tour here on the gulf coast of MS. We are going to perform the Album Testimony and encourage young people to live for Christ!

Chase: Music is in many ways a Universal Language. When you mix it with Truth it becomes so powerful! My wife and I hope that you enjoy the hard work we put into the album (almost a whole year!) - and look forward to putting out a lot more music in the future.

P.S. don't wait to chase your dreams! Go for it!