The 10-week tour launches January 10, 2008 in Johnson City, TN, and will conclude at the Sommet Center in Nashville, TN on March 16th hitting 19 states along the way. Grammy-nominated and Dove Award-winning, NewSong will host the high-energy event for the 13th consecutive year, which will feature special guest speaker Tony Nolan and the Xtreme sports Real Encounter BMX/Skate Team.

The Premier Groups Roy Morgan, co-producer of the Winter Jam Tour Spectacular with Celerity Entertainment, comments, Each year weve been pressed to outdo the previous tour, and we could not be more pleased with this amazing collection of todays top Christian artists. Were thrilled that all five of 2008s lights-down artists have had significant mainstream radio and media exposure, helping Winter Jam reach its goals of impacting the world through local church ministries.

NewSongs Eddie Carswell reflects, We give God the glory for growing this simple multi-artist event into a major national evangelistic outreach. Admission is only $10 at the door, and we wont turn anyone away who cant afford to pay. Last year more than 37,000 people made decisions for Christ during the Tour and were anticipating a phenomenal response in 2008 as well.

Vince Wilcox, president of Celerity Entertainment, affirmed that Holt International, the worlds leader in child adoption and relocation services, will once again be a sponsor of Winter Jam 2008, along with the Wayne E. Bailey Produce Company. HearItFirst.com is back as a sponsor and will be giving out free download cards to the first 500 in line each night. Dave Ramsey's "Generation Change" student finance curriculum is also a new sponsor this year. Wilcox also announced a landmark partnership for 2008: The Word Label Group Pre-Jam Party featuring pureNRG and Group 1 Crew. Co-sponsored by media giants Fox Faith and Word Label Group, this event begins forty minutes before the official start of the show and will feature acclaimed pop trio Group 1 Crew and tween sensations pureNRG. For more information, please visit www.jamtour.com.

MercyMes lead singer Bart Millard anticipates a tremendous response, MercyMe has a new record releasing on November 20, so hitting the road on Winter Jam early in 08 will be great. We look forward to playing our new songs, which is always fun for us, and of course the old favorites too for the Winter Jam crowds.

Winter Jam 2008 follows the highly successful 2007 tour, which landed in Pollstars Top 10 Winter Tours surpassing artists like Nickelback, Red Hot Chili Peppers and John Mayer. WJ '07 averaged over 8,000 people each night with select shows having more than 10,000 in attendance. The 2007 Tour had total turnout of more than 275,000.

Excited to reach the masses during Winter Jam 2008, BarlowGirl shares, We are so excited about the ministry that will take place during the tour. Getting to be a part of this tour is such an honor for us girls. We have heard from so my of our friends that have been a part in the past saying that the crowds are truly awesome.

Also thrilled to be a part of the Winter Jam tour, Skillet lead singer John Cooper remarks, Weve heard great things about Winter Jam and are really excited to be a part of it this coming year. Skillet loves to rock, and look forward to having a blast with audiences throughout the country on this tour.

Winter Jam 2008 Tour Spectacular Artist/Speaker Line-Up:
MercyMe: (www.mercyme.org, www.myspace.com/mercyme)
Following five bestselling projects, nine consecutive No. 1 Christian singles and four back-to-back mainstream radio hits, the multi platinum, Dove Award winning and Grammy-nominated band MercyMe returns with their next batch of hook-filled and emotionally grabbing songs on All That Is Within Me due November 20th. MercyMe is one of few Contemporary Christian music groups to have had all of their recordings certified Gold or Platinum. Since their debut in 2001, Grammy-nominated, American Music Award and multiple GMA Music Award winners MercyMe have sold over 4 million units in CD and DVD sales, including Almost There, nearly triple platinum, their 2003 project Spoken For which is approaching platinum sales, and the RIAA Gold certification for Undone, the MercyMe Live DVD, and Coming Up to Breathe, which also entered the Billboard Top 100 at No. 13. In addition, MercyMe has garnered four consecutive mainstream radio hits with I Can Only Imagine, (No. 4 AC/top 25 on Top 40/Hot AC), Here With Me (No. 4 AC), Homesick (top 10 AC), and So Long Self. With their multi-platinum sales, and one of the industry's most notable talents, MercyMe has sold out venues including Radio City Music Hall and received media attention from the likes of The Tonight Show, CNN, Fox New Channels Fox & Friends, ABC News, CBS Early Show, and has been seen on the pages of Entertainment Weekly, The New York Times, USA Today, Billboard, and more. NewSong (www.newsongonline.com). Dove Award-winning and GRAMMY nominee NewSong is back on the road again this fall with its Rescue 2007 Tour featuring Echoing Angels, Jimmy Needham and illusionist BJ Harris. NewSong has recorded 17 albums featuring 19 No. 1 singles including such signature songs as Arise My Love, Cant Keep A Good Man Down, Red Letter Day, and the recent singles Psalm 40 and Rescue. Their holiday anthem, The Christmas Shoes, became a #1 mainstream radio hit, and inspired a New York Times-bestselling book and CBS Movie of the Week. The album of the same name was nominated for a Grammy Award for Best Pop/Contemporary Gospel Album in 2003.

BarlowGirl: (www.barlowgirl.com, www.myspace.com/barlowgirl)
Fervent Records sibling recording artist BarlowGirl stormed onto the music scene and became the best-selling new Christian artist of 2004. The hit single, Never Alone, was the longest running # 1 song on CHR and Christian Rock charts. The groups momentum continued with the release of Another Journal Entry in 2005 with the hit singles Let Go and I Need You to Love Me. The latter spent a record 13 weeks at # 1 on the CHR charts, making BarlowGirl the second most played CHR artist of the year in 2005. Their most recent release How Can We Be Silent debuted at #1 on all charts in the summer of 2007. These albums collectively have sold over 650,000 units. BarlowGirl is featured on the Portable Sounds tour featuring TobyMac and Thousand Foot Krutch.

Skillet: (www.skillet.com, www.myspace.com/skilletmusic)
Skillets explosive 2006 Lava/Atlantic/Ardent/SRE Records release, Comatose follows 2004s Collide, which launched the group into the public eye and garnered the band a Grammy nomination. A critical fave, Comatose has become their best-selling project to date, doubling the sales of Collide in half the time. In follow up to packed out club shows on their own as well as with Flyleaf, and performances before summer festival crowds, this fall Skillet opened for mainstream rockers Breaking Benjamin and Three Days Grace. Radio has also welcomed Comatose, as the first single, Rebirthing spent seven-weeks at No.1 on Christian Rock. Their second single, The Last Night, also took the top spot, this time at both Rock and CHR (CRW/R&R), while their latest singles, The Older I Get (CHR) and Comatose, (Rock) are now climbing the charts.

Mandisa: (www.mandisaofficial.com, www.myspace.com/mandisa)
Just over a year ago Mandisa shot to instant fame when millions of TV viewers across the nation watched as she sang her way into the American Idol finals. Following a #1 Single, appearances on The Today Show, Live! With Regis & Kelly, countless radio and retail visits, vocal powerhouse Mandisas debut CD, True Beauty, entered at No. 1 on Soundscans Christian/Gospel and itunes Christian/Gospel charts. Mandisa'a chart entry marked the first debut album by a female solo artist to open at # 1 since this chart converted to Nielsen SoundScan back in 1995.

pureNRG: (www.purenrgonline.com)
The pureNRG kids have been singing and dancing together since the age of three. Now their songs are making waves at Radio Disney and they continue to be one of the best selling new artists for 2007. Their sound and style closely aligns with the ever-growing tween market, and parents and kids alike are going crazy for pureNRG!

Group 1 Crew: (www.group1crew.com)
One of the best-selling and most-touring new artists of 2007, Group 1 Crew combines their passion for youth, and a pop, hip/hop flair in an attempt to point people to the hope they have found in Jesus. Group 1 Crew was featured on the 2007 Superchic{k} tour and continue to travel to public schools performing and speaking to youth.

Real Encounter
BMX and Skateboarding have exploded onto the action sports scene in recent years. The Real Encounter BMX/Skate team is no exception. Whether doing back flips or high-flying over the audience, people of all ages are mesmerized by their heart-pounding stunts! Aware of the enormous appeal of action sports to Americas youth, the team uses their incredible abilities to reach students for Christ. Whether speaking for student ministries, school assemblies or community outreach events, Real Encounter is sure to draw a crowd and leave an eternal impression!

Fox Faith: (www.foxfaith.com) FoxFaith, a branded label from Twentieth Century Fox, was launched in 2002 to house and distribute its growing portfolio of morally-driven, family-friendly programming to a market of millions of Christian households worldwide. Since that time, the Studio has released products through mainstream and Christian Bookseller's Association (CBA) retail stores, selling more than 30 million Faith-based DVDs. 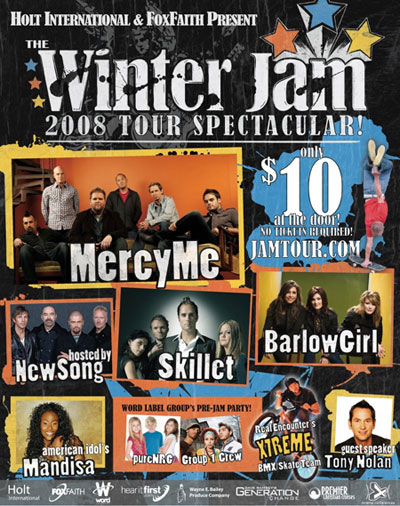