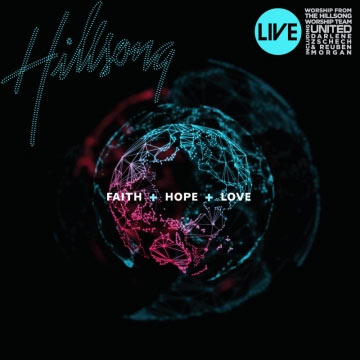 The CD features 13 live tracks including new music such as the Top 10 iTunes single "You Hold Me Now co-written by Morgan, winner of the 2009 Dove Award for Worship Song of the Year (Mighty to Save). Other stand-outs include His Glory Appears written by Darlene Zschech and Marty Sampson; Its Your Love penned by Mia Fieldes and The Wonder Of Your Love, penned by the Hillsongs Sampson and guest writers Jack Mooring and Leeland Mooring.

The Faith+Hope+Love companion DVD offers live video of each song plus documentary footage. In addition, Faith+Hope+Love worship resources, including CD trax, a songbook and a digital songbook, will be available October 9.

Hillsong Music is a ministry of the Sydney-based Hillsong Church, Australias largest evangelical congregation with sister churches in London, Paris, Kiev and South Africa. With churches across the globe singing their songs, and sales of over five million units in the U.S. alone, Hillsong Music is one of the worlds leading producers of praise and worship music and resources.