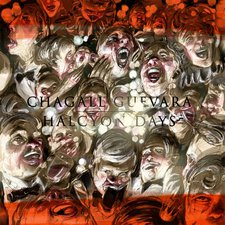 
In 1991, Steve Taylor and a band of musicians wanted to make music that didn't fit within the typical CCM bubble. They had been signed to MCA Records and released their debut self-titled album to critical acclaim. It looked like Taylor and crew were paving new paths and on the verge of golden days. Then MCA folded and with it, Chagall Guevara's hopes. The band had been working on a sophomore album and even had a live recording on hand, but with the label going under, the group decided to go separate ways. And that, as they say, was that. At least until 2020 when they ran a successful Kickstarter campaign that saw the release of that live album The Last Amen and eventually their true sophomore record, Halcyon Days.

What immediately makes this album charming is that it feels like the group is literally picking up where they left off. Part of that is due to most of these songs being written and recorded in the early '90s. The rest of it is a clear effort to reinvent their sound from their debut. Rather than make it sound dated, it gives the listener the thrill of opening a time capsule and discovering never-before-heard music that had been lost for years. The main difference in sound is that Taylor's voice sounds somehow scratchier and rougher. It's a little jarring but it works well with the lyrics he's singing. While Taylor (and his lyrics) is the main feature here, the rest of the band gets plenty of opportunities to shine. From drummer Mike Mead's frantic pounding on "Got Any Change?" to the jam session guitarists Dave Perkins and Lynn Nichols have on "Treasure of the Broken Land" to bassist Wade Jaynes keeping up with the rollicking set list throughout; Chagall Guevara flexes their musical muscle at every turn.

As fun as this album is to listen to, let's be honest -- you're tuning in to hear some biting commentary from Steve Taylor, and you get plenty of it. You might gather from the title of Halcyon Days that this is a record dealing with what the world considers as the ideal existence and how hollow that can be. Given that most of these songs were written in the midst of dealing with their record label, there's an obvious critique of the music industry, whether that be mainstream (the title track) or CCM ("Still Know Your Number By Heart," which contains an excellent line about "drugs and alcohol"). Some of the songs (whether written recently or in the '90s) go beyond the music industry to expose how we fall for treasures on earth. "Resurrection #9," "Surrender" and "Goldfingers" feel especially apropos for today's culture. Through it all, Taylor's word-craft shines like a Grammy award. A whole paragraph could be devoted to his lyrics, but instead of quoting particular gems like someone retelling jokes from a sitcom, I'll leave it to you to discover them on your own (it is worth having the lyrics pulled up while listening).

There is much that can be said about this album, and as far as music critique goes, I'm probably not doing it justice. The main takeaway is that you should give this album a listen, especially if you enjoy witty lyrics and early '90s rock. Even if you don't enjoy those things, it's worth a listen. The themes and messages Taylor is meting out are worth deeper consideration. The album breezes by, but the rumination can last for a long time after. Was it worth a thirty-year wait for a follow-up to an underappreciated debut album? Yes, it certainly was. And if this is the *ahem* last amen by the group, it gives fans a sense of closure. Obviously, more music from Chagall Guevara would be great, but for now we can bask in the glow of Halcyon Days.