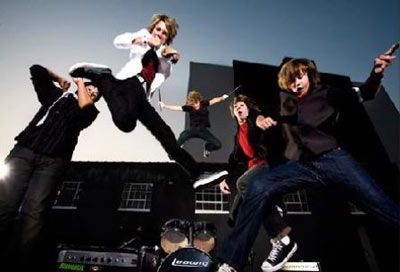 (NASHVILLE, TENN.) -- New teen band MISSION SIX is currently featured on the Radio Disney Incubator, where the band will be featured during the month of May. The band's debut album Superhero, produced by nationally acclaimed producers/songwriters Kevan Cyka (Hilary Duff, Everlife) and Dan Needham (Jump5), will be released by BEMA Media through Infinity Music Distribution on July 29, 2008. BEMA Media is a new label venture founded by Cyka with industry veterans Don Koch and Tom Johnson.

With an intense degree of contagious energy in their show and music, the band is quickly drawing a large fanbase with their unique brand of teen powerpop that draws instant comparisons to groups like Family Force Five, Stellar Kart and of course, The Jonas Brothers. Having already shared the stage with such artists as pureNRG, DecembeRadio, Jump5 and Everlife, MISSION SIX will continue to tour throughout the year in support of their debut album.

"The first time I saw them play live, I thought 'no way, they can't be that good at that age!'" says producer Kevan Cyka. "But they were. This band is the real deal."

The five young super-musicians that make up MISSION SIX range in age from 12-14, and reside in the small town of Evansville, Indiana. Noah (lead vocals, guitar), Issac (vocals, keys), Michael (vocals, bass), David (drums) and Anthony (lead guitar) are quick to point out that while there are only five band members, they have each decided to put God first in their lives, making him the official sixth member of the band. There is so much happening in the world right now that takes our direction away from the most important basic things in life," says Noah. "We want to help our generation regroup and enjoy life with fun music and simple energy.

Launched in early 2005, Radio Disney Incubator features the hottest new musical acts under the age of 21 through exclusive audio features on the Radio Disney network and exclusive content on Radio Disney's website. The online features allow fans to listen to music, view photos and read more about these up and coming artists. Radio Disney can be heard in 97% of the United States on over 50 radio stations, XM and Sirius satellite radio and digital cable & satellite TV music provider, MUSIC CHOICE.