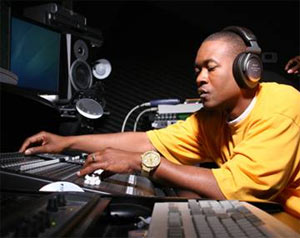 
Atlanta, GA (May 12, 2009) Grammy, Stellar and Dove Award-nominated artist Canton Jones has found the perfect title for his next record  The Interview, The Question, The Answer. Currently working on his fourth original album for Arrow Records, gospel hip hop artist Canton Jones is a young but seasoned artist whose positive and outstanding range of talents have made him a fan favorite with his exhilarating stage shows, catchy mix of music that crosses genres from hip hop to gospel, R&B and more, and encouraging messages about faith and lifes struggles and choices. Reaching out to his fans for their inspiration, Canton Jones is working hard on his record, set for a 2009 release, and his fans have gotten creative with their submissions for the Whatchamacallit Album naming Contest.

Launched on March 11th, Arrow Records gave fans a chance to name Canton Jones' next album, with a Whatchamacallit contest through their website, www.arrow-records.com. From March 11th through March 20th, fans flooded the emails and websites for Canton to claim their shot at offering what they thought would be the winning title for Canton Jones latest project, and get a chance to win some prizes. The winning submission of the title The Interview, The Question, The Answer came from fan Isaac Blanco, who wins the grand prize package of a Canton Jones Anthology (complete collection of Arrow Records catalog of Canton Jones autographed CDs), autographed CD, and a t-shirt as well as inclusion on the next album. The second place winner is Yolanda Ray and she will receive an autographed CD and t-shirt and the third place winner, Edwin Varfley, will receive an autographed CD.

About Canton Jones
Based in Atlanta, Jones positive messages and talent have made him a rising star, who is well-regarded by both gospel artists and his secular peers in the Hip Hop and R&B worlds. His uncompromising approach to spreading the Good News of Jesus Christ through music has brought him many accolades and inspired many fans. Jones is a member and a Praise and Worship leader at World Changers Church International, where Dr. Creflo Dollar is the Senior Pastor. Jones is also one of the breakout artists on Arrow Records, which is owned and operated by Dr. Creflo and Pastor Taffi Dollar.

About Arrow Records
Arrow Records, an affiliate of Creflo Dollar Ministries, is a Word-based record company located in College Park, Georgia. Established in 1998, our mission is to restore gospel music back to its original purpose-to usher in the power and presence of God in order to encourage the brokenhearted, heal the sick, deliver the captive and save the lost through the rhythm and beat of hip-hop, jazz, praise and worship, pop, urban, instrumental, inspirational, contemporary and traditional black gospel, and alternative sounds.