EVERLIFE TO OPEN FOR THE JONAS BROTHERS IN NASHVILLE 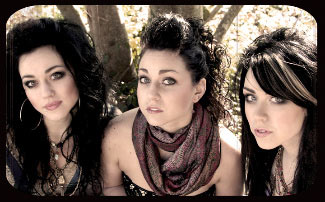 (NASHVILLE, Tennessee)  Nashville-based sister rock-trio Everlife has been added to one of the final stops of the Jonas Brothers World Tour, giving them an opportunity to play a rare show in front of a hometown crowd at the Sommet Center in Nashville on Tuesday, August 25th. Everlife will kick off the show with an acoustic set highlighting familiar hits plus new material from their new EP at the Love Library.

The Ross sisters  Amber, Julia and Sara  came together as a group in 1997. While still in their teens, they signed to SHELTERecords before moving on to Disneys Buena Vista Records, giving them the opportunity to perform for millions of fans while on tours with Disney teen superstars The Cheetah Girls and Miley Cyrus.

We grew up performing for years in random places; from churches to bars to parties to festivals. We always had to gauge our audience and learn what they would respond to, says Julia. The Disney tours helped us perfect that, how to perform for hundreds of thousands of kids, parents and teens all at once and still be able to capture them individually.

At the conclusion of 2007, Everlife found themselves at a crossroads  although family-friendly, their songwriting and musical style was maturing  making it harder to be a childrens band. Eventually, they parted ways with Disney.

Spending their time writing, touring Germany with the USO, creating and promoting their own Christmas tour, organizing and headlining a 2 month tour through 8 countries in Europe and independently producing a new 4 song EP, the girls focused on developing their musical prowess and defining, together, exactly what kind of band they are. Julia (20), Sarah (23) and Amber (25) emerged as beautiful young women with amazing musical stories to tell. Their resulting balanced and positive view of life and classic pop rock style resonates with their peers and will capture your heart.

After parting ways with the label, and unexpectedly having to self-manage, we were thrown into really figuring out who we were as Everlife, says Amber. We realized were always telling stories, writing about the things we know and hoping to inspire people in their lives.

Adds Julia, We want our music to resonate with people. To showcase what we love, a mix of faith, harmony and sticking to our roots in rocknroll.

Remaining true to their family friendly core and keeping the pact the sisters made as children, Everlife has become a group of unquestionably savvy business women and musicians. Although their new journey has just begun, their timeless music, harmonious vocals and deeply honest lyrics prove Julia, Sarah and Amber truly have come of age.

For more info on Everlife, visit the JFH Artists Database.