Award winning Canadian rockers Critical Mass have been making music since 1997. The band has not only won two Canadian Gospel Music Association awards for "Best Rock Album," they also have several other nominations to their name. While it's been 8 years since their last release, the band seems to be back in top form. Their new album, Serenity, is a concept album that deals with some heavy subject matter not typically covered in Christian circles. The album lyrics cover frontman David Wang's personal journey through divorce, the darkness that comes with it, and the healing and hope that he came to in the end. Albums that deal in real world problems from a Christian perspective seem to be a little more appealing for a lot of listeners over the all positive messages contained in most modern CCM and worship music.

Serenity is set to a pop/rock soundtrack with a lot of 90s influence. "Misery, My Friend" may be the height of this influence and is reminiscent of a band like All Star United. As can be expected from a journey like this, the front half of the album is much darker and moody. The hurt and pain can be felt in the lyrics. The new single, "AlieNation," talks about issues of how some parents keep the kids away from the other parent, and lying to them to gain additional control -- something known as parental alienation. This is something I've personally witnessed first-hand with a family member. The band has even gone on to create a website (www.EndAlieNation.org) to educate and try to end this practice. There's some outlash and blaming going on early in "Letters." Wang sings, "Was it worth it to you to betray me this way? All the lies and deceit to keep my kids away." He also goes on in the same song to thank his friends for carrying him through the difficult times and for being a rock to comfort him. Things begin to shift with the title track, which is based on the serenity prayer.

"Joy in Pain" is another upbeat song along the lines of "Misery, My Friend," and the mood certainly fits the message. "Sorry" follows as a heartfelt apology to his son for the damage caused by a toxic relationship. The piano ballad here is another perfect fit. After the island-themed "I'll Be Fine," the story eventually ends on a positive note with reconciliation between his son and him, and a cover of George Harrison's "Here Comes the Sun." It's a faithful version to the original and does not stray far at all from The Beatles' most streamed song. Overall, it's a happy and fitting ending to this story. One other thing of note is the skits that open some songs that help to narrate the story. It's a great way to tell what's going on within the concept.

Serenity is likely a long overdue album. Divorce is a taboo topic within a lot of churches and Christian circles, but it's, unfortunately, a very real part of many Christian lives. Kudos to David Wang for putting his journey out there for others to experience. There are likely many people out there that could take comfort in, and/or learn from, this story. It's an ugly story, but I believe there is a positive outcome in exploring these dark corners of life from a perspective of faith. Serenity is worth a listen for a multitude of reasons.

Canadian rock band Critical Mass has been around since 1997, winning several awards in their homeland for Best Rock Album in 2000 and 2005 respectively. Deeply influenced by their Catholic faith, the group formed with the mission to bring Contemporary Christian music stylings to Canadian teens. Now, in 2021 after many lineup changes and a long break between independently released albums, Critical Mass returns with their fifth full-length album, titled Serenity.

Bearing some similarities in vocal and musical expression to All Star United, Critical Mass has had an impressive amount of success across the last twenty-four years of music-making independently. When asked of their recent resurgence, the group still has carried no plans to sign to a label, remaining happily independent. Notably, Serenity is a concept album of sorts, sharing the story of founder and lead singer David Wang's divorce, mental health journey, and the pain of parental alienation.

Despite these heavy topics, the musical palate is upbeat and catchy with bouncy guitars like the ones found in "Misery, My Friend," "Leaving Town," or "Joy in Pain." Additionally, "AlieNation" and its power-pop/punk leanings reminds slightly of Jimmy Eat World, and it's a sound they pull off well. The juxtaposition of lyrically heavy and musically sunny is balanced nicely throughout the tracklist.

Other highlights for this previously unfamiliar listener are the stirring and heartbreaking "Sorry," and the reggae/horns combo of the earnest "I'll Be Fine." Lastly, their cover of The Beatles classic tune, "Here Comes the Sun," closes the album on a familiar and hopeful note, as the story of coming through the pain of relational wounds on the other side full of hope is clear. It's always risky to cover a beloved musical icon, and though this cover treads no new ground, it's respectful of the original and well-done.

Overall, Critical Mass accomplishes their mission of spreading hope while authentically sharing the process of deep pain and healing. "Misery, My Friend" is my favorite track, but there are several others that are hooky and worth a listen. All in all, if you like the aforementioned bands or share a similar life story, you should give this one a shot. - Review date: 11/20/21, Josh Balogh of Jesusfreakhideout.com 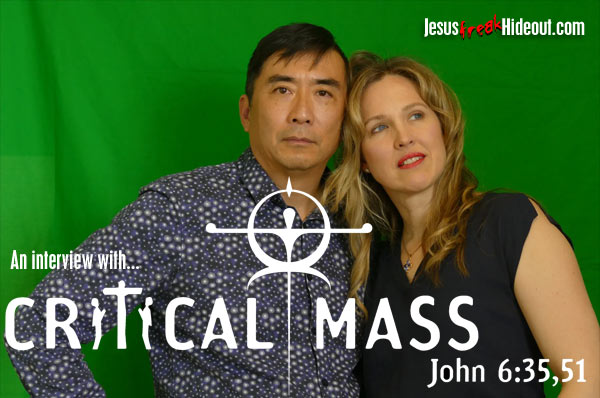 David Wang: I had more or less retired from music after releasing our compilation album 8 years ago. However, sometimes life hits you with a massive curve ball. As a Christian, I never thought I would ever be dealing with the pain and heartache of a divorce, with all of the family chaos that comes with that. When I went to try to find music to console myself with, I found very little with a God-centered viewpoint. I found myself writing as therapy. The writing became lyrics and then the lyrics became songs. What you hear on the album is my journey, from the separation to despair and then back to hope and God.

David: Because it was really done as therapy, most of the songs came to me as I lived them. A few of the songs, like "Last Goodbye," were songs that had long since been put into storage, but came back to life with new meaning, after seeing them through the lens of my life experiences. At the end, I wanted a familiar song so I picked "Here Comes the Sun". It was such an appropriate end to the story of my journey.

David: I look at this as being a story of joy, but it took some hard work to get there. I am a big believer in counseling. I know some are able to immediately turn to prayer effectively but if you are in a panicky and anxious state of mind, it is hard to focus and to think clearly. It is even hard to know what to ask for. I sought out friends, counselors and clergy to help me through my difficulties. It has really helped me be able to come through with my mental wellness intact. I think many, particularly men, try too hard to power through the darkness without reaching out for help. In fact, the joyful eventual outcome would not have happened without counseling as I would not have been in a healthy place to start any relationship. I am about to be married to April, the inspiration for the song "April Rain!"

David: Parental alienation happens when a parent tries to influence, even to the point of brainwashing, a child to reject their own parent after a high conflict divorce. The child starts to take on the voice of the alienating parent and will actively reject and even persecute the targeted parent. It is very common (13% of American adults) and likely all of us have seen it happen or have had it happen to us. It is a horrific form of child abuse, as the child is called to erase a once-beloved parent from their lives. As I researched this topic, I encountered more and more targeted mothers and fathers who told me their stories. The grief they feel is incredible, even leading some of them to feel suicidal. I tried to convey this grief in the lyrics. While writing the song, the movie "Invasion of Body Snatchers" came to mind, where people you love suddenly take on the identity of an alien entity, hence the song title "AlieNation". I wrote the words so they apply directly to both parental alienation as well as the plot of the movie. In order to help create more awareness, I have created a site EndAlieNation.org with information about the science, law and links to other helpful resources. Of course, Critical Mass' music and videos all play a big part on this website to help create a soundtrack for those suffering from parental alienation.

David: My friend, Ian Tanner (formerly of the band One Hundred Days) wrote the music and it sat on the shelf for many years. I wanted to write a song about dealing with depression and decided to personify depression as a rotten friend called Misery, who never leaves you alone. The lyrics are very dark but when producer Andrew Horrocks sat down with me, we decided to give the song a hopeful message by framing it with a pop punk sensibility. I didn't want to make the song cheesy by ending it with a "believe in Him and you will be happy" lyric, partly because for many people, that is not their reality. However, the upbeat fun feel of the song, I hope, helps convey the message that, if you get help to stay mentally healthy, you can bop through life with that upbeat spirit, even if Misery is trying to beat you down.

David: I have to laugh. I started as a concert promoter and Ian Eskelin of All Star United was one of the first Christian bands I promoted. My biggest influence lyrically was Steve Taylor. His use of satire and clever wordplay is something else! As you can see from the songs, the lyrics really drive the story and thus the album. The musical styles on this album reflect the tone of the lyrics, which is why it is so musically diverse. That being said, The Beatles and Pink Floyd are the other big influences, inspiring the whole idea of a concept album.

David: God has taught me empathy. Prior to what happened, I have to admit to having black and white thinking on issues like divorce. After what happened to me, I am far more sympathetic and understanding of those around me. Jesus didn't stand around with the Pharisees pointing fingers. He walked amongst the tax collectors and harlots, to show them true love and understanding. For the rest of my life, I plan to emulate this kind of Christ-like love to those around me.